It was my first thought upon awakening this morning...

The real thing was happening not that long ago, and for far longer than 20 minutes.

saw the horrors of war until it was over.  I didn't take him to see "Private Ryan"

at the theater because I had heard of some vets having heart attacks,

so I waited for it's release on VHS tape. I figured it would be less intense

on the small screen.

We rolled the tape one night after dinner...He made it through the D Day

scene OK...Further in, he asked me to stop the movie.  He shared some

thoughts, and then gave the go ahead to resume.  Not long after that, the

video started rolling....tracking problems...I tried to adjust the VCR, but

couldn't fix it. I will forever believe that it was Divine Intervention.

still in bed. It was after 9, and Dad always got up around 6. He

liked to get up and get going, even if gettin going only meant drinking

coffee and reading the paper.

When I got home after noon, I went upstairs and found him still in bed.

The movie had brought it all back to him. He shared things that I'm not

sure if he had shared with anyone else. He had kept it all bottled up for

I told him how proud we all were of him. How thankful we were of his service.

And that I loved him.

And that was that. We never spoke of it again. And he never finished the movie.

I believe that everyone who has survived combat returns home wounded.

behind enemy lines in the hours before the landings 70 years ago today....

To those Americans who have fought from Concord to Kandahar....

I go back to "Saving Private Ryan" and Captain John Miller's

I hope that I live my life in such a manner. 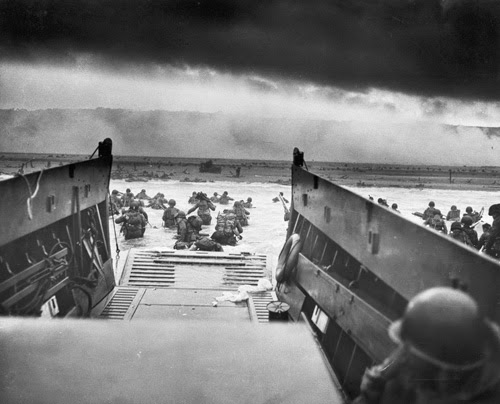