On the way to meet friends for sushi this evening, Marianne informed me

that we had to stop by Home Depot, because we "needed" some things.

Most husbands learn pretty quickly that their wives' definition of  "needs"

differs substantially from their own, and they also learn pretty quickly

Three huge bags of "regular" dirt, and one bag of "fancy" dirt.

I think the "regular" dirt is to add to the yard, and the "fancy" dirt is for

So.....somewhere there's a guy who takes the dirt he digs from

I think Marianne even felt a bit iffy about the purchase, because once we

rolled up to the checkout counter, she said, "Why don't you go and load up

Ignorance is bliss, and I'm a happy man.

Almost as happy as I get when we go to Kohl's and she proclaims, 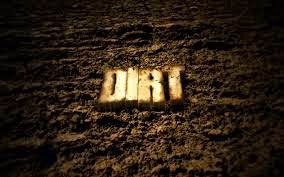