One of our grandson Mason's favorite shows is "Teenage Mutant Ninja Turtles"...

I've tried to convince him that I'm a ninja, but he ain't buyin' it.

was in middle school....For 2 1/2 years it was some good Daddy/Daughter Time.

After that period we were ready to test for black belt.

That had been the goal. No quittin' til we each earned one..

We ran through our forms and self defense techniques flawlessly.

We broke boards with our hands and feet.

We even broke a 2" slab of cinder block.

But that was just the warm up.  The final test was sparring.

I was called to the center of the workout area, or dojang...

Master Lee called out Nathan to be my first opponent.

On command, Nathan attacked me like I had taken his

last Oreo. My knees and ankles were takin' a beating, when

join in the attack. Soon there was a kicking and punching swarm of them.

It evolved from martial arts to a foot race, with me keeping

ahead of them as best I could. I circled around behind the heavy

punching bag and pushed it towards a coupla of them. It was

no use. They were simply overpowering me. I could think

of only one thing to save myself.

I picked up Nathan and used him as a human shield.

And I got my black belt.  Jessica did too.

That would require another 6 months of intense training and study.

You may think of me as sort of a Barney Fife of the ninjas... 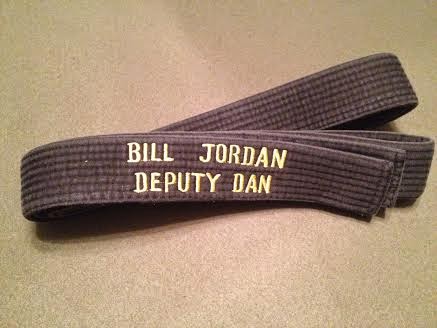