Medal Of Honor today in the Oval Office...

Here's what the official citation says...


For conspicuous gallantry and intrepidity at the risk of his life above and beyond
the call of duty while serving as an automatic rifleman with Company F, 2nd Battalion,
9th Marines, Regimental Combat Team One, 1st Marine Division (Forward), 1st Marine
Expeditionary Force (Forward), in Helmand Province, Afghanistan in support of
Operation Enduring Freedom on 21 November, 2010.
Lance Corporal Carpenter was a member of a platoon-sized coalition force comprised
of two reinforced Marine rifle squads, partnered with an Afghan National Army squad.
The platoon had established Patrol Base Dakota two days earlier in a small village in
the Marja District in order to disrupt enemy activity and provide security for the local
Afghan population.
Lance Corporal Carpenter and a fellow Marine were manning a rooftop security position
on the perimeter of Patrol Base Dakota when the enemy initiated a daylight attack with
hand grenades, one of which landed inside their sandbagged position.  Without hesitation
and with complete disregard for his own safety, Lance Corporal Carpenter moved towards
the grenade in an attempt to shield his fellow Marine from the deadly blast.  When the
grenade detonated, his body absorbed the brunt of the blast, severely wounding him but
saving the life of his fellow Marine.
By his undaunted courage, bold fighting spirit, and unwavering devotion to duty in the
face of almost certain death, Lance Corporal Carpenter reflected great credit upon himself
and upheld the highest traditions of the Marine Corps and the United States Naval Service.
He was pronounced "PEA", Patient Expired on Arrival. The docs brought him back.
Corporal Carpenter has endured 40 surgeries, the loss of an eye and most of his lower teeth.
He is not bitter. He uses this event to remind himself to appreciate the small things,
to be kind to others and to let those you love know that you love them.
I hope to think of him, and others like him, when I believe I'm having a bad day. 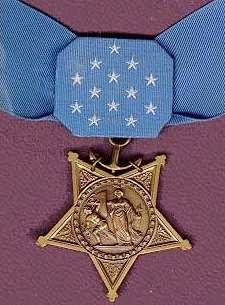