Just got notice today that our "Community Yard Sale" is comin' up.

Remind me to be out of the country.

than actually having the yard sale.

First, you have to decide WHAT you want to sell. And if you're married,

that includes NEGOTIATION and RATIONALIZATION.

Hey, maybe I wanna keep my copy of  "Top Gun", and besides, maybe VHS tapes will make a comeback.

If your wife doesn't wanna sell it, it doesn't get sold.

If YOU don't wanna sell it, don't blink.

This is called "compromise".

And the most common price for anything is 10 cents. That's too much for some folks.

At that point I've got no choice but to mess with 'em...

We once had an Elvis impersonator show up and ask if I had any of the King's stuff.

We once had a packet of glitter stolen. I know it was stolen because the packet was sliced open

think of it, I seem to recall Cher was in concert that weekend...)

And then there's that odd feelin' you get when people look at your crap like it's....crap.

When my parents moved in an effort to downsize in their retirement, they decided to have

a yard sale.  Put an ad in the paper that clearly stated that it would start at 7am.  Folks started

showing up at 5:30...There wasn't a price marked on anything. Above the furor I can

still hear my mother's wail..."Calm down everyone! No reasonable offer will be forgiven!!!..."

I think Mom said exactly what she meant... 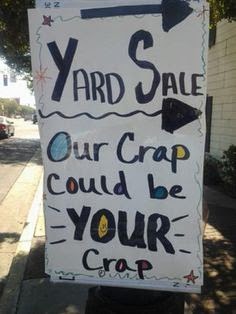