Close Encounters Of The "No Shoulders" Kind......

I love surprises. When pulled on others.

I'm usually embarrassed when I'm surprised...Don't know what to say.

I was surprised today.

I was cleaning up some stuff we've had piled up near our HVAC units.

That's when I came face to fang with a coiled up copperhead.

Almost became an "old sprinkler" myself...

I called a friend who catches and releases them, but he was 150 miles

I've always teased Marianne that she has a very specific "Snake Scream".

Even  compound words that previously had never existed.

Apparently this time, I knew what to say...

Now I'm waitin' on our HOA to fine me for violating some noise ordinances... 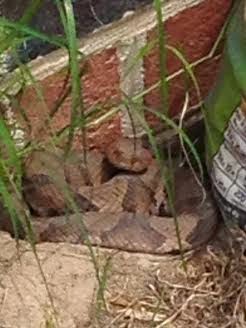