The story behind the photo.....

A few days ago, I posted a photo on Facebook of legendary Academy Award winning actor Charlton Heston and me in the WRAL-FM studio...The photo was taken in the Spring of 1997 when he was in town for a book signing of his "To Be A Man: Letters To My Grandson"....My on air partner, "Tall" Donna Mason had arranged with Quail Ridge Books in Raleigh to have Mr. Heston come into the show for an interview....He was scheduled to be there at 8:30am. I felt pretty confident that he would be a "no show".  It's not unusual at all for a celebrity to either not appear in person or be AWOL with a scheduled phone call....And, after all, Charlton Heston was the BIGGEST celebrity ever scheduled on the show. I cannot describe how I felt when he did not walk into the studio at 8:30......but at 8:20....Ten minutes EARLY.
Introductions were made....He asked me where the men's room was. I directed him. And I immediately thought, "Why didn't I go with him?!?!?!?..."  Not too many people would be able to top the story of standing side by side with Moses himself at the urinals....
One of my friends with Capitol Broadcasting was there as a photographer, and upon his return to the studio started clicking away with her gigantic camera.....After countless "clicks" he turned to her and in a voice that was soft yet rumbled..."Isn't one enough?" Uh oh, I thought...This is gonna be tough.
I always like to put the guest at ease if possible by building some kind of rapport with them....Obviously he had endured thousands of interviews before, so the challenge is always to make the guest feel comfortable and that they are having a conversation and not being grilled...There was only one angle I could think of as we went "live" on the air..."We have a very special in studio guest with us this morning....Please welcome Mr. Charlton Heston!!!"  I immediately explained to him that when I was growing up, my friends and I always got the actors Al Pacino and Dustin Hoffman confused. "And I understand, that back in the day, you were often confused with Burt Lancaster?" I will never forget his response. "That reminds me of a funny story." My heart jumped. I knew we had touched on some magic. He continued (in that commanding voice of his) "My friend Kirk Douglas told me one time about his being in his front yard one morning when a stranger walked by and shouted to him, 'I loved you in the "Ten Commandments"!!!....Kirk said "I wasn't IN the "Ten Commandments"!!! To which the stranger yelled back, "Well, if you're not Burt Lancaster, then who the hell are ya?!?!?" What a great story. And with that, the ice was broken and he was a most genial and gracious guest.
And now....the rest of the story.
When we were finished with the interview, we posed for a photo. The camera clicked once. I'm no dummy. I stepped away. He grabbed me by the arm, pulled me back and pronounced "She needs another..."
What a moment... 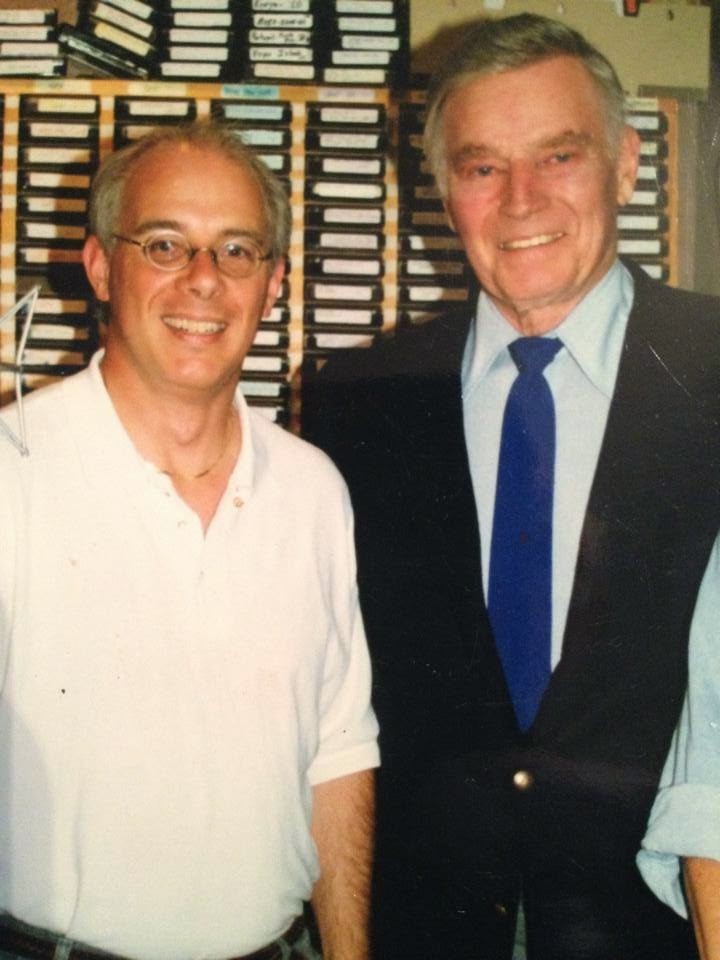