Our grandboy Mason turned 7 today.
Of course, it doesn't seem possible.
A blink ago he was a newborn. I remember smelling his head. He smelled new.
I smelled his head tonight at dinner, and he told me, "Poppy, I think I've had enough of that!!!..."
He can reason, and argue, and negotiate now.
He can be funny. He sings silly songs. He's growing up.
So much ahead of him. Elementary, middle and high schools.
So much to learn. Including the fact that his Poppy isn't really a ninja.
I can't wait to see what he'll be interested in. What he'll want to do.
I say, "I can't wait", but.....I'd like to. I hope that time will slow down a bit.
He's only "1" in dog years. Still a puppy.
I hope that God will let me see his wedding day. If so, I hope to sneak up on him at some point and steal a sniff of his head. 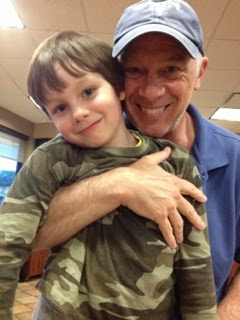