It was the final day of our 5 day Radiothon for Duke Children's Hospital. I was struggling with finding the right words to say, in the right combination, the right inflection..The phones needed to ring. Alan was with me in the studio. He simplified the task. "When you get right down to it, people should give because it's just the right thing to do..."
We had met Alan a few years before. He was my daughter's age. He pulled an oxygen tank behind him. He had Cystic Fibrosis. He was around 12 years old.
Very quickly it became apparent that he and his family were special people. For some I had met, having a child with a serious medical condition had torn the unit apart. But this family seemed to grow stronger.
Alan received a double lung transplant. He competed on his school's track team. Things were looking up.
But the side effects of the anti-rejection drugs took their toll. He received a kidney from his grandfather...He needed another from his father. He lost an eye. He developed diabetes.
His Dad called me the night before my final show on WRAL-FM...I sensed something was wrong. He uttered the word "hospice".  An aggressive cancer had attacked Alan's liver.
Marianne and I drove over to Duke University Medical Center to see them. There was Alan. As I first saw him. Pulling an oxygen tank behind him. We all talked and laughed about some stuff. As we were leaving, I reminded him of all the lives that he had touched. All the people, young and old, that he had inspired. I assured him that he would continue to do so...
Alan entered into his heavenly home one year ago today.
The church was packed for his service. What a tribute to his life. Such a short life that had such an enormous impact on so many lives. And still does.
At the conclusion of his memorial, family and friends released hundreds of balloons toward heaven, but he was already there... 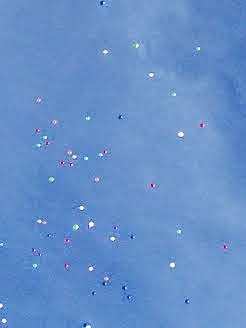