jockey and music director at WROV-AM in Roanoke, Virginia.

Around 12:30 a listener called in and asked me if Elvis was dead.

"Are you kiddin'??? No. Elvis is definitely NOT dead."

oldies to play.  The current hits had to be played in a particular

order and rotation, but freedom of choice was the rule for the older songs.

As the song ended, he announced that Elvis had been found dead

at Graceland at approximately 2:30 that afternoon.

Hmmmmmm.......How did that caller know that he was dead

two hours before he was found?  I went on the air the next day

and asked her to call in again.  I never heard from her, and it

still remains a mystery to me.

Years later in the late 80's, rumors started that Elvis had faked

his own death, and there were "sightings" of him at random

fast food joints around the country.  By then I was doing mornings

in Durham, North Carolina, and we hatched an idea to broadcast

live from Graceland on the morning of  his anticipated return.

I don't recall the date of our broadcast, but I remember the

add up to the total of 2001. Reports were that Elvis believed most

strongly in numerology, and would return on the date that would

just before he appeared onstage at his concerts....The theme from

As you know, Elvis did not return on that date, or any other for that matter.

That we know of.

on such a specific date, consider this. 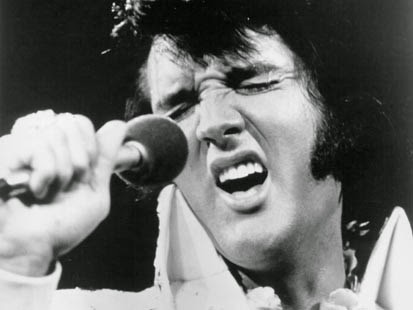