It's part of the Yin and Yang of life, I suppose.

Over the weekend, my family and I, like millions of others,

participated in the "Ice Bucket Challenge" to raise funds and

awareness for ALS, aka "Lou Gehrig's Disease".  It has gone "viral"

on social media and millions of dollars have been raised through

the effort.  It was a fun thing to do, and we made a donation.

I just saw an online survey that revealed almost 50%

of people said that they would never do something

like that.  I'm sure they have their reasons.  Maybe they think it

would be embarrassing. Maybe they don't want to be cold

and wet for a few seconds.  Maybe they don't have the money to

The bothersome thing to me is that some of them won't

because they just don't care.  About ALS patients.  Or about

These are the Takers.

There are all kinds of ways to give.

your time as a volunteer.  You can give your wisdom in a

mentoring role.  You can give a kind word or deed when and

Takers do none of that.

It took me a long time to realize the truth in the saying, "It is

better to give than to receive."  I've found that it feels better too.

Danny Thomas famously said, "There are two kinds of people in

the world. Givers and Takers. The Takers may eat better, but the

And I enjoy my sleep. 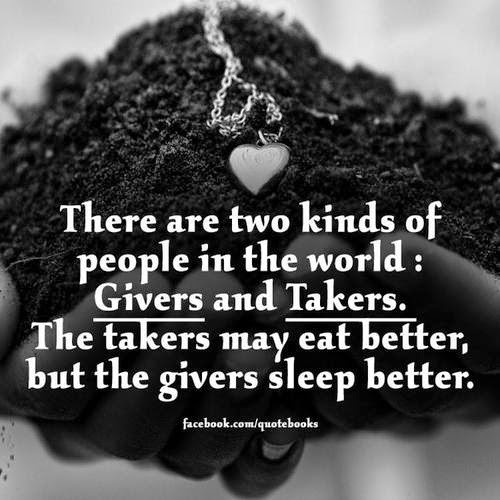